The Mycology Interviews: A Therapeutic Renaissance with William Padilla Brown 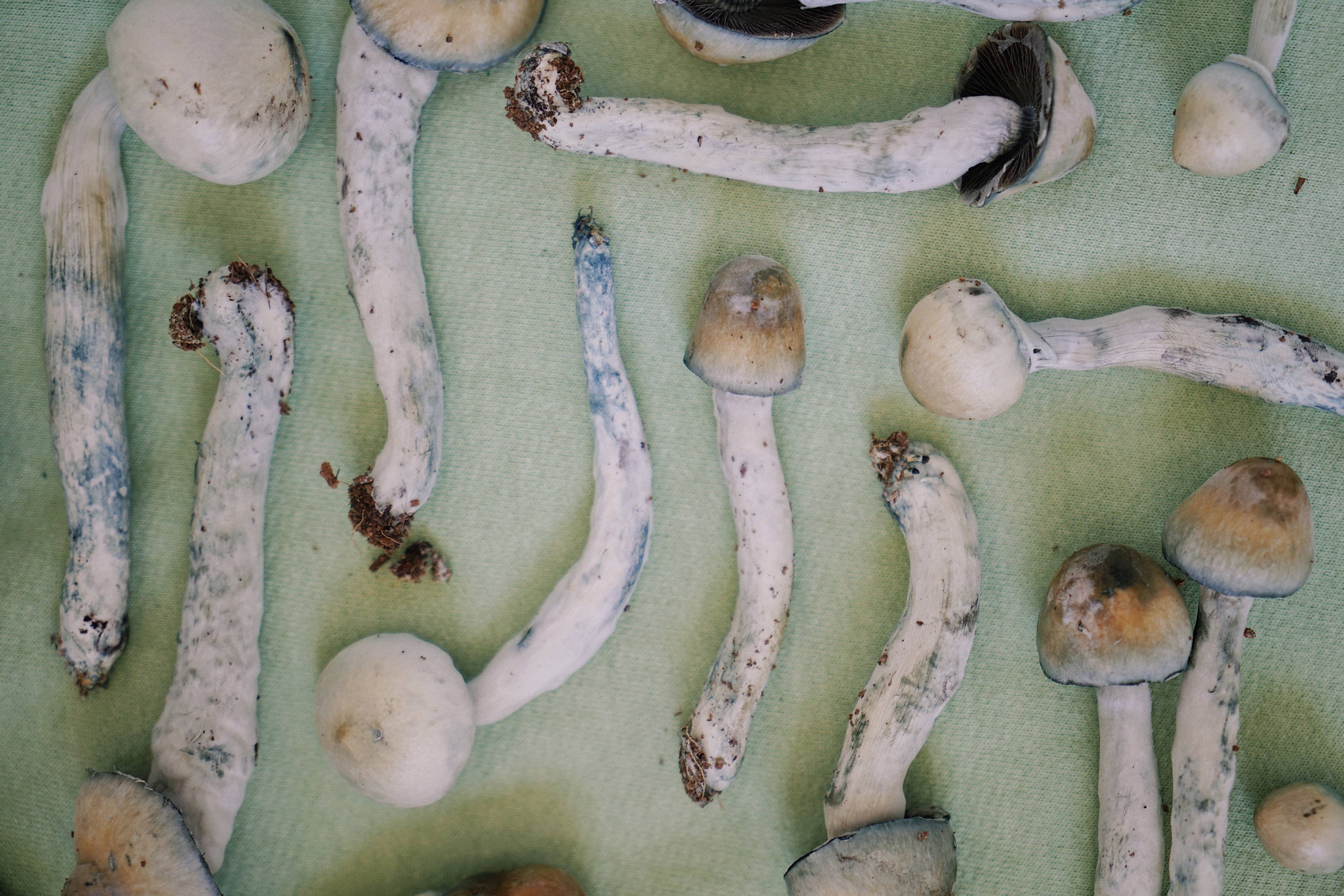 What first sparked your interest in mycology?

When I was 16 I dropped out of school to learn more about myself and what I wanted out of the world. Around that time I began experimenting with plant and fungal medicines. I remember when we would get a bag of mushrooms, back then everyone told me to eat the dust at the bottom of the bag to get you extra spun. Later, in my own research, I learned that the dust at the bottom of the bag usually contained the material they were grown on (manure), because many growers wouldn't trim their mushrooms so they would weigh more for sale. This understanding disgusted me a bit so I learned to grow my own so I could ensure they were clean and know where they came from. Around the same time I was becoming interested in gardening and permaculture design, a whole systems design science. As I began growing my own food and learning permaculture from local teachers, I began to see wild mushrooms everywhere. I asked about them but no one really knew enough to teach me. I figured I wasn't the only one in my area who had questions about mushrooms, so I took it upon myself to learn more about mushrooms so that I could teach others. As I delved into mycology I fell deeply in love with the novelty, the mystery, and the cultures that surround fungi and their mushrooms. 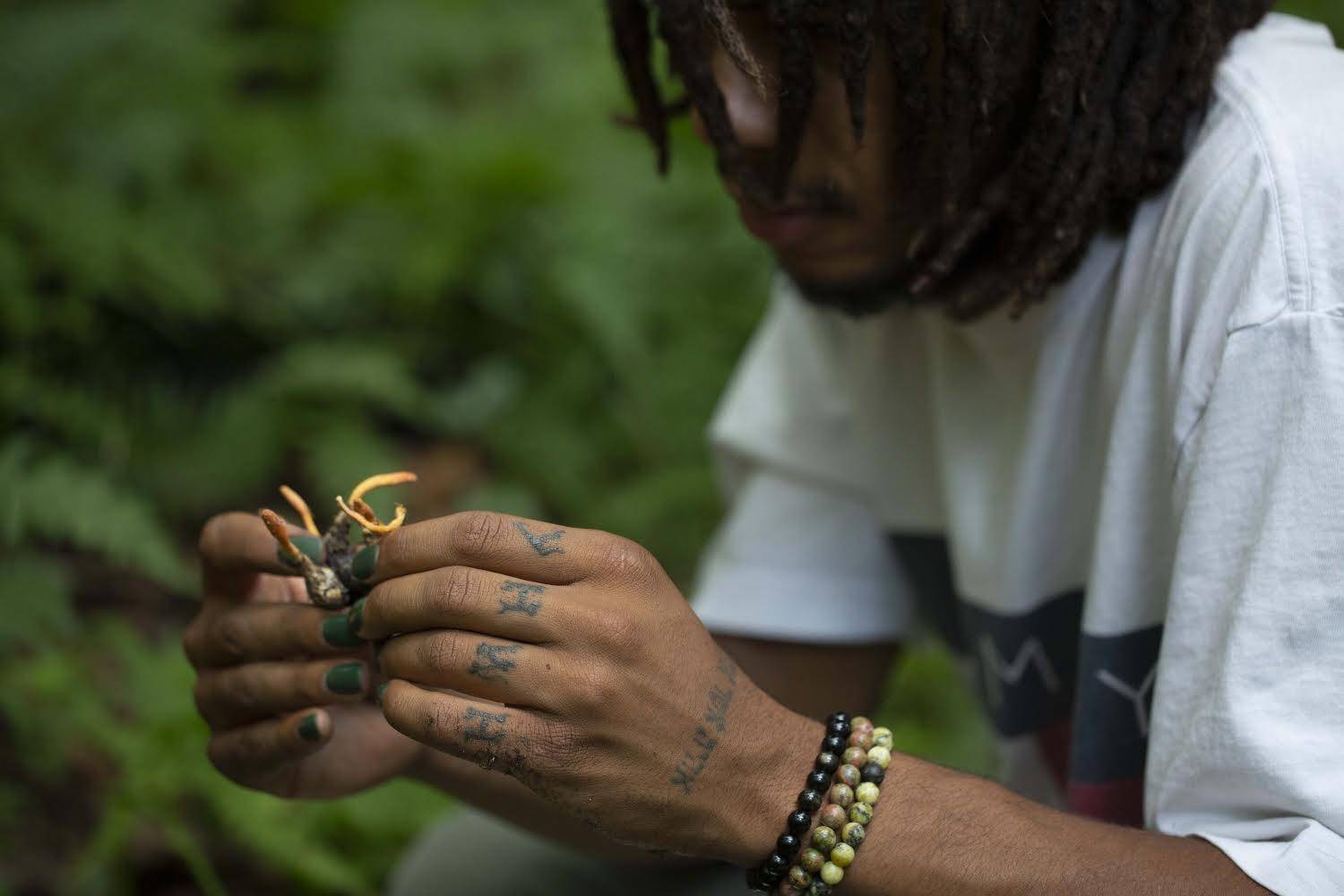 "As I delved into mycology I fell deeply in love with the novelty, the mystery and the cultures that surround fungi and their mushrooms."

What is the importance of mushrooms in the wild?

Each mushroom has an association with another organism, maybe another fungus, an animal, a plant, an insect, or some microorganisms. This association may be something the mushrooms depend upon for nutrients or spore dispersal. Some mushrooms receive most of their nutrients from tree roots, the fungus can access nutrients the tree needs but can't access itself and the mushroom needs nutrients the tree produces, and it can't produce for itself. Some mushrooms, like truffles, need an animal to find it and eat it to disperse its spores. For reasons like this many mushrooms produce compounds beneficial to the organisms it shares a relationship with, these compounds can be antiviral, antimicrobial, anti tumor, the list goes on and on. Aside from the medicinal importance of wild mushrooms, without them we would be drowning in detritus, mushrooms are the stomach of the forest, they are often the first organism on the scene when a tree falls, working to break it down so it doesn't just lay there on the forest floor forever. Fungi and their mushrooms are actively creating living soils to build up the nutrients available for plant life in the wild. Mushrooms like Cordyceps that feed on insects act as a biological control to maintain insect populations so they don't overpopulate and consume an unsustainable amount of plant material. Fungi that live in the stomach of beetles and termites are the entire reason that they are able to consume wood! The list goes on and on, I like to think of fungi and their mushrooms as Composing-Decomposers, though their ecological role is one of organic decomposition, they also act as composers, composing a beautiful symphony of Life!

What are some of the ways mushrooms can help us both physically and mentally?

Most mushrooms contain polysaccharides (long-chain sugars) these polysaccharides trigger our immune systems in a very interesting way, we call this immune modulation. The polysaccharides in mushrooms act differently in the bodies of individuals with overactive or under-active immune systems helping to sustain homeostasis. Most well known medicinal mushrooms contain species-specific unique compounds usually named after the mushrooms and often tote amazing benefits. Ganoderma (Reishi) mushrooms contain Ganoderans which have shown hypoglycemic properties. Hericium (Lions mane) mushrooms contain Hericenones and Erinacines, these compounds are known to stimulate nerve growth factor which is beneficial to our physical and mental states. Cordyceps mushrooms contain Cordycepin and Cordymin compounds that not only provide us with cellular energy, but also have anti tumor properties and have recently been shown to inhibit HIV-1 reverse transcriptase which basically means it may inhibit the replication of HIV! Psilocybe (Magic) mushrooms contain psilocybin, which is metabolized into psilocin which has incredible benefits to our mental states. They also contain baeocystin and norbaeocystin which are currently being researched and have been reported to provide gentle psychoactive effects. There are stories from Asia of a town of mushroom farmers who ate the scrapped mushrooms from the farm and had some of the lowest cancer rates and highest life time expectancy. I'm a big proponent of eating some mushrooms with one meal a day as a preventative. I believe we see the most benefit with daily consumption whether that's capsules to just cooking and eating them.

What role do mushrooms play in the therapeutic Renaissance that is currently underway?

Mushrooms hold an interesting place in this therapeutic renaissance. For one, they are one of the most well known psychoactive therapeutic substances. Mushrooms have a long history of use and have been more readily accepted into academia in comparison to mescaline containing cacti and dimethyltryptamine containing plants. Psilocybin containing mushrooms like most psychoactive substances are slightly unpredictable in the sense that the experience is very user-driven, the compounds affect each individual differently. Another thing with psilocybin mushrooms is that they can be found in the wild all around the world, so it is one of the most easily accessible psychoactive substances in the world aside from cannabis. From what we have seen psilocybin-containing mushrooms have incredible therapeutic benefits for individuals suffering from PTSD, addiction, and cancer, and death related anxiety. With decriminalization in a few cities around our country, we must tread carefully, the cities that decriminalized psychoactive plants will lay the blueprint for legalization efforts and the citizens of those places hold the responsibility of promoting safe usage. If people abuse these substances and end up in questionable situations while under the influence we could run into legislative issues later on.

Micro dosing has been rapidly gaining popularity over the years, what are your thoughts on it and where do you see its importance?

Micro dosing has incredible benefits for cognition and mood stabilization. I've heard a few incredible stories of nerve regeneration with the use of micro dose psilocybin with Lion's mane. I don't think micro dosing is for everyone. I've heard stories of individuals becoming a little too aggressive or temperamental when micro dosing as the substance has a different effect on different people. Once more information comes out on proper usage I know we will find even more benefit. Many individuals micro dosing don't know that they shouldn't be doing it every day, you need a couple of days off a week when doing a regiment. Also dosage is still not clear for everyone. I feel as though micro dosing will be very important in aiding individuals who have had a long term dependency on legal amphetamines like Adderall, and other prescription medications for anxiety and depression. Micro dosing has and will continue to find success with individuals in the 9-5 workflow with increased attentiveness, creativity and energy levels.

We saw that you were doing some pretty cool things all out of the lab you have set up in your basement. Can you tell us more about the capabilities of your at home setup?

I feel like my home lab gives me superpowers! My home lab is mostly set up for mycology and other types of microbiology. Over the past year I have upgraded my lab for molecular biology which has given me the capability of extracting, amplifying and sequencing DNA. The DNA work is really interesting and helpful for things that I was already doing like breeding Cordyceps mushrooms. The sexual life of mushrooms is much more complex than humans, for example, Cordyceps militarism has 3 mating types or "genders". I wouldn't be able to confirm their mating type without the tools for DNA extraction and amplification. My newest piece of equipment is a nanopore sequencer from Oxford Nanopore, it is a portable DNA sequencer the size of a small stapler, I love this because of its size and ease of use I can take it out of the lab and sequence the DNA of organisms in the field. Most of my lab is set up for cloning mushrooms, growing their mycelium, and storing cultures. I do a little microscopy every now and then down there, mostly for isolating spore from Cordyceps mushrooms in farms around the country. I sell my cultures in syringes through my online store mycoshop.net

How much do we really know about mushrooms and how much left is there to uncover?

We are just scratching the surface with mushrooms. Mycology is one of the newest biological sciences, as mushrooms were considered to be plants until the mid-1800s. A lot of research has been focused on utilizing them for food or medicine, but we are starting to see individuals branding out into biotech and textiles among many other things. When I was 22 years old my friend and I figured out how to cultivate Cordyceps mushrooms and I ended up publishing the first publicly available literature in English on cultivating Cordyceps. In my classes, I try to inspire people to get out there and find something new. As the ecosystems are changing and recovering from deforestation or even being deforested we have the potential to find mushrooms that may have not been seen for hundreds, maybe even thousands of years. There's incredible potential to discover new species, especially in 3rd world countries, but even just walking outside your house you could find a poorly researched mushroom that might hold incredible medicinal potential or may be able to remediate some environmental contaminant. As mycologists and inquisitive humans, we have lifetimes of work and discoveries ahead of us. 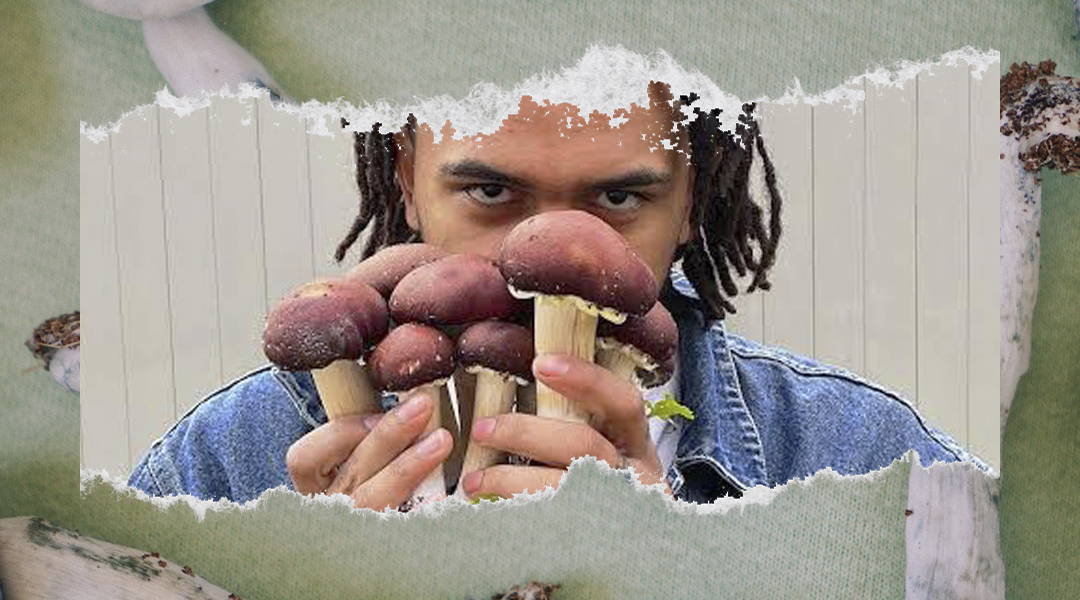 What are some of your goals you wish to accomplish or key areas you want to explore further in your career?

At this point I just published my 3rd book and I'm very proud of myself for that, its been my goal for the past 2 years. Now I really want to gain access to analytical laboratories to do some deeper studies on the compounds various mushrooms produce. I'd like to study the chemical structure of these mushroom compounds so we can figure out the best extraction methods. I want to buy some land and create a school so I can always have some students or interns available to help me in my research as we discover cultivation techniques for various medicinal and edible mushrooms. I would like to utilize the land I purchase for large scale outdoor cultivation and restoration experiments. I plan on working with my local government once again to be implementing tried and true mycology, and phyla (algae) remediation systems to deal with wastewater pollution in local water systems. My biggest goal would be to have enough people on my team helping with research so I can free my mind to develop new Probiotic Ecologically Regenerative Sustainable Micro Industries so my community can decentralize from the antibiotic centralized macro industrial system we all rely so heavily on. We have incredible potential to reverse the wrongdoings of our culture, by taking the steps to first heal ourselves, mentally and physically, heal our family, our neighbors, our communities, and then heal the land. I see my career moving towards the development of sustainable social systems, I've spent so much time looking into problems and designing solutions and its time to implement these new systems.

The Mycology Interviews: The Spiritual Carwash with Gerard Armond Powell

What is plant medicine and what does it have to offer for the individual and ...